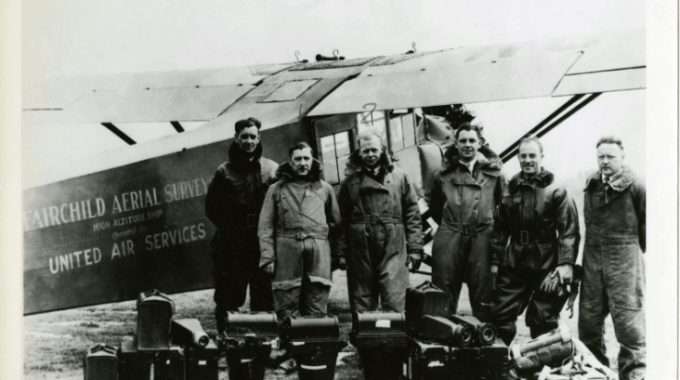 Aerial imagery forms the basis of today’s web mapping, and the history of aerial imagery goes all the way back to the 1800s, when the first aerial photograph was captured by a Frenchman who was both a photographer and balloonist. Gaspard-Felix Tournachon flew over Paris, France in a balloon and photographed the city from the air in 1858. Two years later, an aerial view of Boston was taken from a height of 630 meters, and this photograph survives today.

In 1882, British meteorologist E.D. Archibald started capturing aerial images from cameras attached to kites. To trigger the camera, he used an explosive charge on a timer that was tied to the kite. Around this time, the French also started using kites to capture aerial images.

Once planes came into existence, aerial imagery went to a new level of sophistication. The first applications occurred in the area of reconnaissance for military purposes. Allied aircraft with cameras attached to them captured important intelligence about enemy movements and defences. Britain’s Royal Air Force (RAF) started observing the activities of the German Army. By 1915, the RAF had photographed the entire system of German trenches.

By the end of World War I, the capture of aerial imagery was standard practice. By 1918, both sides had taken more than 500,000 aerial photos since the beginning of the war.

History of Aerial Imagery: Commercial Aerial Photography Gets Its Start

Aerial photography then made its way to America, where Sherman Fairchild started his own aircraft company to build aircraft designed specifically for high-altitude aerial survey missions. In 1935, a Fairchild aerial survey plane set a record by taking photos from an altitude of 23,000 feet, with each photo covering 225 square miles.

In 1939, two Royal Air Force officers came up with the then radical idea of switching to small, fast aircraft to capture aerial imagery needed for military intelligence. They used Spitfires with radio & guns removed, in order to carry extra fuel, to carry cameras and conduct reconnassance activities.

In World War II, the Allies also needed a way to determine what was real foliage, and what was fake vegetation that the Germans were using to hide military installations. Around this time, researchers on the side of the allies figured out that infrared could easily distinguish between real vegetation and fake vegetation being used as camoflage.

Sub-orbital rocket flights were the first sources of truly high-altitude imagery. In October of 1946, the United States launched a V-2 rocket that captured images every 1.5 seconds at a height five times higher than the previous record. In 1959, the world saw the first photographs sourced from satellites orbiting the earth. Satellite imagery provided so many insights that it became a priority to map the globe. In 1972, the United States started “Landsat” – a huge initiative designed to capture a massive library of images of the earth from space. In 1977, the world saw the first aerial imagery of the earth in real time from the United States’ KH-11 satellite system.

Of note, satellite images produced by NASA are published by NASA Earth Observatory, and are available for the public to access.

Aerial imagery has been provided by high-flying planes such as the Fairchild high-altitude survey planes. The first Fairchild high-altitude survey plane was the FC-1. The latest version is the Fairchild 71. These planes were developed specifically to capture aerial imagery of the earth because standard planes were not capable of flying steadily enough to capture clear images. One of the main sources of Bing Maps imagery comes from planes. For more information on how Bing Maps captures their aerial imagery, click or tap HERE.

Satellites continue to provide powerful and insightful views of the earth from space. If you’re interested in a short visual primer of the satellites orbiting the earth and the data they capture, learn more from GIS Geography.

For obvious reasons, full-sized planes are not allowed to be flown at altitudes lower than 1,000 feet, or near congested areas with high-density living. When the need arose for aerial imagery shot from lower altitudes, unmanned drones were developed and allowed aerial imagery to be captured up to a height of 400 feet.

MapSavvy: An Evolution of Aerial Imagery Based on Bing Maps

MapSavvy is an affordable web mapping service that has arisen from the development of aerial imagery and geographic information systems (GIS). A web map service generates a map image that comes from a database of aerial imagery. These map images can be used in all sorts of applications including: city planning, architecture, oil & gas pipeline planning, wildlife research, conservation planning, emergency preparedness & disaster planning, and much more.

MapSavvy is the most affordable source of up-to-date aerial imagery on the market today. It costs just $500 per year for up to 20,000 images.

Need a web map service for your business, non-profit, or government research? Try a free trial of MapSavvy.

When it comes to looking for a conservation planning software tool, web mapping services that…

Copyright 2020 - All Rights Reserved
Back To Top